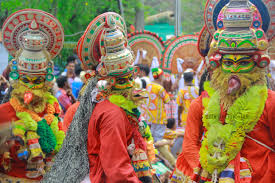 Onam is the Harvest festival of Kerala, Gods Own Country; Its also a tourism season in Kerala; #boatrace#Onasadya#shopping#festival

..’A nine-course meal prepared with the choicest homemade ingredients and served on the symbolic plantain leaf, the Onasadya has come to represent the true Malayalee spirit of gaiety and mirth, as dining tables are whisked away from sight and people sit cross-legged on the floor to pamper their taste buds and revel in the culinary delights handed down from generations’…

The festival of Onam best encapsulates the essence of Kerala-the coming together of an eclectic mix of colour, flavour, fervour and enthusiasm, not to mention, a seamless blend of tradition and modernity. The legends associated with the festival are many, and its manifestations varied and multifarious. But the theme is one and the same-the celebration of a season of harvest and plenty.

The images associated with this festival are many, but none as evocative as the attractively designed flower patterns on the threshold of every home. The freshest and the best of blooms are handpicked to recreate a magical kaleidoscope of shape and hue, as one Malayalee after another takes pride in relieving the bygone days of old, when unity, oneness, tolerance and hard work were the order of the day.

The various games associated with the festival are hard to miss. Native and indigenous to the ethos of Kerala, these games bring alive the memories of a land steeped in tradition, yet not immune to the vestiges of time.  The boisterous rhythms of the famous boat race or Vallamkalli are much awaited and talked about every year, as is the graceful dance form Thiruvathira, a celebration in aesthetics. It is mind-boggling to watch the transformation that envelopes even the smallest bylanes and streets in God’s own country, as they come alive with cultural depictions and interpretations of this season of abundance.

None of these, however, can compare with the Onasadya, an ambrosial extravaganza that is the delight of every true gourmand. A nine-course meal prepared with the choicest homemade ingredients and served on the symbolic plantain leaf, the Onasadya has come to represent the true Malayalee spirit of gaiety and mirth, as dining tables are whisked away from sight and people sit cross-legged on the floor to pamper their taste buds and revel in the culinary delights handed down from generations. A tiny portion of these dishes, enough to tantalise even the strictest of dieters, is served along with rice, and accompaniments like spoons and forks are done away with as fingers merrily knead the flavors together. Little wonder then, that silence pervades the dining area, as each of these delights are savored down to the last morsel.

Those in the know say that long ago, “Onasadya” used to be even more elaborate than the ones prepared today. There were as many as 64 mandatory dishes – eight varieties each of eight main dishes. So much so that three banana leaves had to be piled up, one on top of the other, while serving, to accommodate all the dishes.

What is interesting is the way the ‘sadya (feast) is prepared. A spacious courtyard converted to a temporary kitchen becomes the scene of action, as a group of enthusiastic women gather around several makeshift ”fires”, stirring and sampling the various dishes. Legend has it that the feast has to be prepared using the right ingredients, in the right proportion. Therefore, great care is taken at the time of preparation.

Onam is a festival that has to be experienced, to comprehend fully. No amount of writing can truly capture the ilk of this multifacted festival that binds together people from God’s own country, regardless of caste, creed or religion.

He can be reached at <caushie07@gmail.com>